Tecate-San Diego resident, Eduardo I. Sanchez, dedicated the first two public tennis courts ever constructed for use by the citizens of Tecate, Mexico, at a ribbon-cutting ceremony on Sunday, June 6, 2004, at 10:00 am., at the Eufrasio Santana sports complex. The mayor of Tecate, Juan Vargas Rodriguez, assisted in the proceedings.

Sanchez, who initiated the tennis court construction project from inception three years prior, formally dedicated and opened the tennis center for use by Tecate youth and citizens, in the memory of his late son, Sean Eduardo Sanchez. Sanchez played the first ball with his three-year old daughter, Siana Raquel, in remembrance of Sean, for which the Sean Eduardo Sanchez (SES) Tennis Center is named after.

"I want the spirit . . .
. . . of my son to watch over all other children who play here to enjoy these tennis courts in his name."
Eduardo I. Sanchez
SES Tennis Center Founder 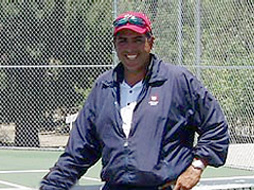 Eduardo was born and raised in the city of Tecate, Mexico. While growing up in Tecate, Sanchez saved the money he earned as a youth while working at the resort, Rancho La Puerta, and purchased his first tennis racquet at a San Diego swap meet at the age of 16. He taught himself to play the sport by watching the tennis pros’ play on the courts at the resort, and by viewing televised matches.

His long journey led him to his current position as Head Tennis Professional at the Rancho Valencia Resort and Spa in Rancho Santa Fe, California, where he launched the resort’s award-winning tennis program in 1989.

On June 6, 2004, he completed a life-long dream, to construct the first two public tennis courts for use by the youth and citizens of Tecate, Mexico, dedicated in honor of the memory of his late son, Sean Eduardo Sanchez. The facility is named the Sean Eduardo Sanchez (SES) Tennis Center. In addition to the SES Tennis Center, Eduardo has been an active member of the San Diego, California community for many years. He is a past board member of the San Diego League and served on the Multicultural USPTA San Diego Division from 1994 to 1995.

He founded the Rancho Valencia Junior Tennis Academy in 2004, and has participated in charity tennis tournaments and provided instruction to handicapped tennis athletes for numerous consecutive years. In 1995, the USPTA San Diego Chapter awarded him the Teaching Professional of the Year designation. At the USPTA annual dinner in May of 2006, Eduardo was presented with the 2005 Community Service Award, for exemplifying the spirit of “growing the game” for tennis in San Diego, and an entire community in Tecate, Mexico. On December 5, 2007, Eduardo received the prestigious 10 News Leadership Award for exemplary community service, presented by Geni Cavitt of CBS, Channel 10 KGTV. Eduardo resides in San Diego with his wife Amelia, daughter Siana Raquel and son Kian Eduardo.

Amelia is a life-long tennis and soccer player and passionate about children having access to sports
She has spent time in the cities of Tecate, Morelia and Guanajuato, Mexico, and understands the challenges facing children and their parents when sports facilities and programs are not locally available.

She is currently Senior Counsel at CGS3 law firm and has more than 20 years of commercial real estate and transactional experience representing national, regional and local companies. She was a San Diego Business Journal Women Who Mean Business Awards finalist in 2015 and 2016.

Amelia is pictured here with her husband Eduardo, daughter Siana and son Kian. 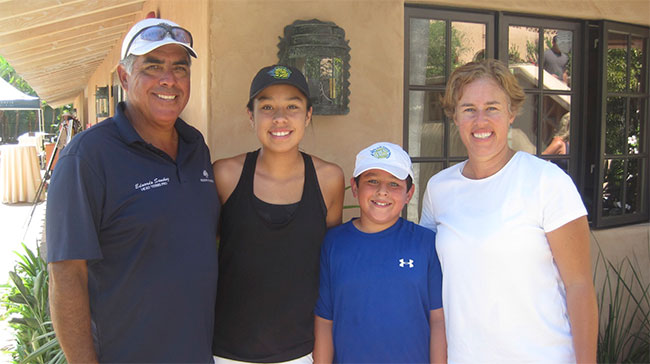 Eva was born in New York City and raised in the Midwest. She is a life-long tennis player and advocate for children among many other charitable causes. As an award-winning marketing/PR professional, Eva has served both the corporate and non-profit sectors for over 25 years.

In 2001, she formed her own California-based corporation, EMS Marketing Consulting, Inc. She is a published journalist who has contributed numerous feature, news and technical articles on a wide variety of subjects and has developed a signature integrated marketing model with measurable results. She holds a distinguished Edward L. Bernays Mark of Excellence Award for Community Relations from the national PRSA (Public Relations Society of America) along with several additional awards.
Eva is graduate-member of LEAD (Leadership Education Awareness Development) San Diego, Inc., and serves on the KGTV (CBS) 10-News Leadership Award Committee. She is a former Board Member and Life Member of The Country Friends (one of San Diego’s oldest grant-making agencies headquartered in Rancho Santa Fe, California) and member of the De Anza Chapter of the Daughters of the American Revolution (DAR), qualified by her ancestor’s military service during the Revolutionary War.

With over 150 children enrolled at the tennis center, we are in need of your tax deductible support through our 501(c)(3) non-profit organization.